Make this a flu-free winter 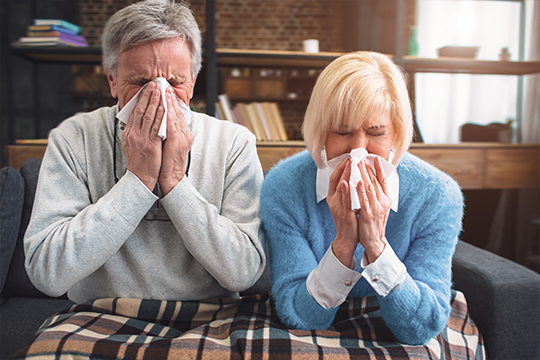 Long nights, cold mornings … you know what that means. Flu season is approaching fast. You’ve likely had the flu before, but keep in mind that it can become a complicated infection — and can be avoided.

Here’s what you need to know:

How does the flu spread?

The flu is transmitted through coughing, talking and sneezing, which can send the virus flying as far as two metres away. It can survive on hard surfaces such as doorknobs for up to two days, and it spreads quickly from person to person. It’s contagious — even when symptoms aren’t present.

How can I prevent the flu?

In addition to maintaining a healthy lifestyle, “the best way to prevent the flu is to get the flu vaccine,” says Kathryn Djordjevic, pharmacist and director of clinical excellence and physician relations at Shoppers Drug Mart. “Other ways include washing your hands often, sanitizing surfaces and avoiding touching your face.”

Who needs the flu shot?

Every Canadian adult — especially those over 65 years of age, and people with chronic health conditions or compromised immune systems — should get the flu shot annually. In fact, seniors are strongly encouraged to get the flu shot because they are at a higher risk of flu complications, such as pneumonia. A 2013 study of seniors in Ontario found that those who received the flu shot had a lower risk of hospitalization and death from the flu.

The best way to avoid getting the virus is to get vaccinated in late fall, according to the Public Health Agency of Canada.  Those dealing with a serious acute illness, infection or fever should postpone the vaccination until they’re in better health.

I’m healthy. Why should I get vaccinated?

“Pretty much everyone should get the flu shot annually, particularly seniors,” says Djordjevic. If you get the flu, you can spread it — which is dangerous to high-risk populations. While most people recover from the flu in about a week, vulnerable adults (and even healthy people) can experience serious complications. Influenza can also worsen conditions such as asthma, congestive heart failure and diabetes. Each flu season, approximately 20,000 Canadians are hospitalized with the flu and its complications, and as many as 8,000 Canadians — mostly seniors — die from pneumonia and other serious complications.

Get vaccinated before flu season strikes. It’s your best defence against the flu. The vaccine is available at many Shoppers Drug Mart pharmacies before and during flu season. No appointment is necessary.