Yellowknife: A Tale of Two Siblings 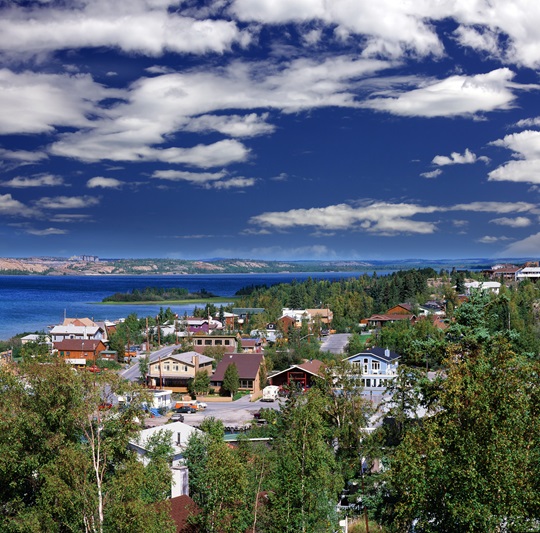 Yellowknife is like two siblings with very different personalities. One of them is a free-spirited rebel who was born and raised on the crooked streets of Old Town. The other is a career-minded professional who works on downtown streets that are so straight they look like someone drew them with a ruler.

Yellowknife is named for the copper-coloured knives that Dene people in the area once used. The rebels arrived after prospector Johnny Baker found gold on the shores of Yellowknife Bay in 1934. The glitter of diamonds lured the modern professionals to the capital of the Northwest Territories after diamond mines opened in the late 1990s.

Get the best view from Bush Pilot’s Monument, which overlooks Old Town and Latham Island. The monument is dedicated to the bush pilots who opened up the North in the 1920s and 1930s. Then check out the recently renovated Wildcat Café, a log cabin built in 1937 and saved from demolition by a group of residents.

Sign up for a two-hour workshop at Old Town Glassworks to see how they turn old wine bottles into drinking glasses—and then sandblast a northern design onto a glass to bring home your own souvenir.

Have tasty fish from Great Slave Lake at Bullocks Bistro in what looks like a shack full of character, with stickers and hand-scrawled messages of appreciation on the walls. Then look out over Yellowknife Bay at the colourful floating homes that make up the continent’s most northerly houseboat community. Go find tiny Ragged Ass Road, which Canadian musician Tom Cochrane popularized with an album of the same name.

With three diamond mines about 300 kilometres north of Yellowknife, the city of about 19,000 people lives up to its aboriginal Dogrib name, Somba K’e, which means the money place. At the NWT Diamond Centre, find out how diamonds are mined in the territory.

Then head over to the Prince of Wales Northern Heritage Centre to see a rotation of exhibits about the North. The round building nearby is the Legislative Assembly. Get a lesson in northern politics during a guided tour. There are no political parties up here; the 19 MLAs are elected as independents and they select the premier from among the elected MLAs a few weeks after the territorial elections are held. The consensus-style government stems from the Aboriginal traditions of the NWT.

Next, enjoy a brush with fame: Tour the Buffalo Airways hangar and its historic DC-3 aircraft, which star on History Television’s reality show Ice Pilots NWT.

Every winter, ice roads are built throughout the Northwest Territories that link isolated communities to one another. Make like television’s Ice Road Truckersand drive over a frozen lake. You’ll be able to tell your friends that you walked on water.

To see the midnight sun, come near the solstice in late June, when Yellowknife gets about 20 hours of daylight and the sun never sets in Inuvik. For the best chance of seeing the Northern Lights, visit in fall or winter. For more information, go to http://spectacularnwt.com.