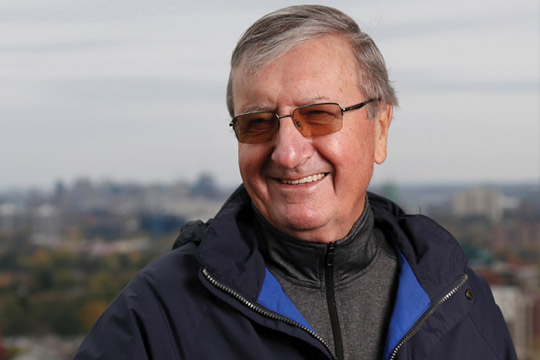 He didn’t “retire” again until 2007, after 13 years at the operational helm. And what did he do then? He took two years off and then joined the board of Federal Retirees as vice-president. In 2015, he became president of the board — elected the first time and acclaimed the second. It’s a position he’ll leave this June, taking with him virtual volumes of corporate memory.

“I’ve been associated in one way or another with the organization for almost 30 years,” Soulière says. “There’s not one file that I didn’t start or know something about.”

When he became executive director, the association only had about 60,000 members (it’s nearly tripled since then) and 10 or 11 employees at the national office. He remembers seeing the job ad and thinking it sounded great, but it didn’t specify the salary.

“I thought, I’ll be retired receiving a pension, so I can accept less in terms of salary, but when they offered the salary, it was like starting at zero again,” he recalls with a laugh. “I refused the job, saying I couldn’t work for that amount. They said they couldn’t offer more. The association was poor and renting rooms at the Public Service Alliance of Canada’s offices. They thought and thought and then said ‘If you take your pension and add the salary, it comes to about the same amount you were making in the public service.’ That’s how they sold me — true story.”

But his real motivation in ultimately accepting the job was that it “fit me like a glove. My main strength when I took all [kinds of skills-related] tests was manager and the second one was missionary,” Soulière says. “Advocacy is close to being a missionary so it fit what I could bring to an organization.”

Asked about how he dealt with the CEO once he became president, having spent 13 years on the other side, he said it wasn’t difficult.

“I had the experience of working with two presidents who wanted to be the top manager as well as being president,” he says. “I had to tell them, ‘Stay away from operations — that’s my job.’ So when I became president, the only time I would get involved in operations is if the CEO wanted me involved, and even then, it was only as an adviser. The CEO is paid for operations.”

Asked about his proudest moments during his time as president, the first was having been elected as president.

“And when I was acclaimed for a second term, with a long, long standing ovation, I had tears in my eyes,” he says. “I cried on stage like a baby — it meant so much to me. I don’t know if I’m proud of that, but it was a moment.”

Second, he named the selection of CEOs under his presidential terms. “We did it right — we selected good CEOs.”

As for his third proudest moment? It hasn’t happened yet, but it will be when he finishes his term because he set priorities that he’s met — getting the Association on solid financial ground, creating harmony in the relationships between the board, branches and national office staff, and, growing the membership.

“Especially in volunteer work, there aren’t too many people who achieve what they set out to do.”

Looking back on 30 years, he recalls one funny incident when he was about to leave his job as executive director at the association. The government had approached him to serve as the first chairman of the National Seniors Council, which had just been established.

He says that was a proud moment because he was recognized for his work on behalf of seniors. He was chairman for two terms.

“It was just two or three days a month, but I travelled the country and it was an incredible experience,” Soulière says.

The secret to his success was to try not to be everything to everyone.

“Our association is so varied in terms of its membership that everyone wants to get involved with everything,” he says. “We get involved with policy issues that relate to seniors specifically, and we never lose sight of our principal mission of protecting our pensions and benefits. But there’s a lot of pressure from [other corners]. For example, environmental issues are very much in the limelight. We don’t take them on because they would be too huge for us to deal with.”

During his tenure as president, Soulière says he has been successful in keeping the Association’s advocacy focused on its primary mission.

“And that, to me, will be a key to the success of the organization in the future,” he says.

He is a lifetime member of the Association and was awarded the Queen Elizabeth II Diamond Jubilee Medal in 2013.

Sage spoke with several colleagues and associates about working with Jean-Guy Soulière over his many years as a seniors’ advocate. Here’s what they had to say:

Anthony Pizzino, CEO of Federal Retirees: “My history with Jean-Guy is very short, but I can say that I liked him from the first time I met him and knew I could work with him because he seemed to be extremely professional.” That first time was at Pizzino’s interview for his current job. “He was very engaging. He answered my questions very directly, no hesitation.” Pizzino says he soon learned that Soulière likes to operate by consensus and make sure people have their say and support the board’s ultimate decision. “It says a lot about a person — looking for ways for people to work together. He was part of the reason I said yes [to this job,] knowing I would have to report through him to the board.”

Deb Schulte, outgoing minister of seniors: “I have been deeply grateful for Jean-Guy’s dedicated, constructive and effective leadership. It built on his decades of public service and work with the National Seniors Council and Public Service Pension Advisory Committee. My team and I will not forget his strong advocacy for the interconnected aspects that ensure a healthy and happy retirement for Canadians, or the decency with which he made the case. Best wishes on his retirement and I am sure that whatever he does in the next chapter of his life, seniors’ issues will never be far from his heart.”

Chris Aylward, president of the Public Service Alliance of Canada: “Jean-Guy always brought the issues to the table, he always defended retired employees and he did it with a tremendous amount of grace and professionalism. If he does get frustrated, he doesn’t show it. He never allows his emotions to be forward-showing. That’s something that I’ve noticed about him. It’s because of that that his message gets delivered very effectively.”

Dennis Jackson, former president of the national association: “[Jean-Guy has been] a truly excellent national president who has carried out his position with exceptional ability. Over the past two years during COVID, he steered the Association masterfully. His ability to run the Association and co-ordinate annual general meetings and other events using Zoom was exceptional, especially when the national office was essentially closed. Jean-Guy will be difficult to replace, but I know that he will always be there to assist when required.”

Jean-Claude Bouchard, former chairman of the PSHCP board: “I’ve known Jean-Guy since the ’80s. He’s a people person, he has empathy, he’s extremely devoted to whatever he does.”

This article appeared in the winter 2021 issue of our in-house magazine, Sage. While you’re here, why not download the full issue and peruse our back issues too?